The Swiss Air-Rescue Service Rega has ordered a second batch of 12 five-bladed H145 helicopters to be operated from its mountain bases.

They will replace the current fleet of AW109SP helicopters. This new order follows an initial contract for nine H145s, announced in March this year. By 2026, Rega will operate an all-Airbus fleet consisting of 21 five-bladed H145s.

“To effectively operate life-saving air rescue services in Switzerland, we understand that the ability to perform optimally at altitude is paramount,” says Bruno Even, CEO of Airbus Helicopters. “The five-bladed H145 landed on the Aconcagua in Chile, a mountain that is nearly 7,000 metres high – no other twin engine helicopter has ever achieved this feat. That is why we are especially proud that Rega has put its faith in the five-bladed H145 and decided to make it the only helicopter type in its fleet to perform such critical missions.”

“By selecting the five-bladed H145, we are ensuring that Rega will continue being able to provide its patients with reliable and professional medical assistance by air for the next 15 years,” says Ernst Kohler, CEO of Rega.

The five-bladed H145s will come equipped with a state-of-the-art navigation system, especially tailored to the operator’s needs that will enhance the mission capabilities and the safety of operations. The system will use new capabilities of the Flight Management System GTN750 Xi by Garmin. It will integrate and control a multi-sensor system that provides highly accurate and reliable navigation capacities. Even in the event of GPS signal loss, the helicopter will navigate safely thanks to Thales’ inertial navigation system. This solution will further boost the navigation performance in low IFR conditions and allows the helicopter to be certified as navigation procedure RNP-AR 0.1, which is the most accurate navigation procedure in the helicopter environment. The configuration also includes a new hoist by Vincorion that is being certified on the five-bladed H145, ensuring highest safety standards.

The new version of Airbus’ best-selling H145 light twin-engine helicopter adds a new, innovative five-bladed rotor to the multi-mission aircraft, increasing the useful load of the helicopter by 150kg. The simplicity of the new bearingless main rotor design also eases maintenance operations, further improving the benchmark serviceability and reliability of the H145, while improving ride comfort for both passengers and crew.

In total, there are more than 1,600 H145 family helicopters in service, logging a total of more than seven million flight hours. Powered by two Safran Arriel 2E engines, the H145 is equipped with full authority digital engine control (FADEC) and the Helionix digital avionics suite. It includes a high performance 4-axis autopilot, increasing safety and reducing pilot workload. Its particularly low acoustic footprint makes the H145 the quietest helicopter in its class, while its CO2 emissions are the lowest amongst its competitors.

The Swiss Air-Rescue Service Rega has ordered nine five-bladed Airbus H145s to replace its current four-bladed versions. Rega’s new H145s will come equipped with a state-of-the-art navigation system that will enhance the mission capabilities and the safety of operations.

“We are very grateful to open another chapter in the relationship between our two organisations with this order for our five-bladed H145,” says Bruno Even, CEO of Airbus Helicopters. “We are always looking at ways to evolve our helicopters by taking into account the feedback of those who operate them each and every day.”

“The H145 has fully proven itself in our operations since entering into service in 2018,” says Ernst Kohler, CEO of Rega. “We look forward to operating the five-bladed version on our HEMS bases in Switzerland. The helicopters will allow us to further boost our mission capabilities and safety of our operations.”

The new version of Airbus’ best-selling H145 light twin-engine helicopter adds a new, innovative five-bladed rotor to the multi-mission aircraft, increasing the useful load of the helicopter by 150 kg. The simplicity of the new bearingless main rotor design also eases maintenance operations, further improving the benchmark serviceability and reliability of the H145, while improving ride comfort for both passengers and crew. The new H145 introduces on-board connectivity to customers and operators through the integration of the next step of the wireless Airborne Communication System (wACS), allowing seamless and secure transmission of data generated by the helicopter.

In total, there are more than 1,500 H145 family helicopters in service, logging a total of more than six million flight hours. Powered by two Safran Arriel 2E engines, the H145 is equipped with full authority digital engine control (FADEC) and the Helionix digital avionics suite. It includes a high performance 4-axis autopilot, increasing safety and reducing pilot workload. Its particularly low acoustic footprint makes the H145 the quietest helicopter in its class.

Here two images of the Agusta A109K2 HB-XWD operated by Rega from Locarno Magadino (TI) base during July 2003. The helicopter was retired from service in Switzerland few years later, replaced by the newer A109SP, and, in April 2010, sold to Air Transport Europe in Slovakia, where she is still flying as OM-ATJ.

Atlanta, 05 march 2019 – Swiss Air-Rescue Rega has taken the decision to retrofit its entire H145 fleet of seven helicopters to the new 5-bladed version, that was revealed yesterday at Heli-Expo, making them the launch customer for the retrofit of the new H145.

“We’re proud to be amongst the first customers to upgrade our H145 to the new version”, said Heinz Leibundgut, Chief Pilot and member of Rega’s Management Board. “Our patients will profit from the increased useful load. It is a great benefit for our air rescue operation, where every additional kilogram is crucial, especially in challenging environments like the Alps.”

“Airbus Helicopters is pleased that Rega has taken the decision to upgrade its entire H145 fleet to the new version” said Bruno Even, CEO of Airbus Helicopters. “We thank Rega for their continued trust in our H145 family of helicopters.”

Rega is currently replacing its EC145 fleet with H145 helicopters. Six out of seven H145s have already been delivered, with the last one to follow in May this year. The helicopters of the H145 family are in service with the Rega for more than 15 years.

The new upgrade of the H145, revealed at Heli-Expo, embodies Airbus’ approach to value creation through innovation. It boasts several new features that will allow customers to enhance their operations: The innovative five-blade bearingless rotor increases the useful load by 150 kg, further enhancing the mission capabilities of the aircraft. This new rotor also improves crew and passenger comfort. Other advantages include a smaller D-value, allowing the H145 to operate in more confined areas, simplified maintenance, and an increased availability rate.

A total of six helicopters for Swiss Air-Rescue.

Donauwörth, 21 June 2018 – Airbus Helicopters has delivered the first two of a total of six H145 helicopters to Swiss Air-Rescue Rega. These will replace Rega’s existing fleet of EC145 helicopters, which will be phased out by mid-2019. The first H145 helicopter is expected to be deployed at the Bern base in October. Over a period of 15 years, the six EC145s have proven themselves to be reliable and versatile rescue helicopters, providing airborne medical assistance to around 60,000 patients to date. Thanks in part to these positive experiences, Rega is now opting for the H145, the successor to the EC145. “The H145 represents a continuation of our success story and ensures that we can continue to provide our patients with reliable and professional help in the years to come,” said Ernst Kohler, CEO of Rega. “We are proud that such an internationally renowned operator as Rega has placed its trust in our H145 family over such a long period of time,” said Wolfgang Schoder, CEO of Airbus Helicopters Deutschland. The H145 is the market leader for police and rescue missions with a combined fleet of over 200 helicopters worldwide, which have jointly accumulated more than 100,000 flight hours. The agile H145 is particularly well suited for special intensive care transports thanks to its spacious cabin and a maximum take-off weight of 3.7 tons. The helicopters are equipped with the Helionix digital avionics suite, providing user-friendly flight data management and a high-performance 4-axis autopilot, which considerably reduces pilot workload during missions. Its particularly low acoustic footprint makes the H145 the quietest helicopter in its class. 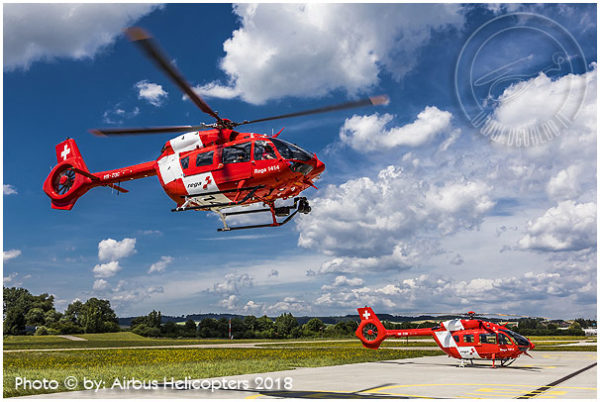 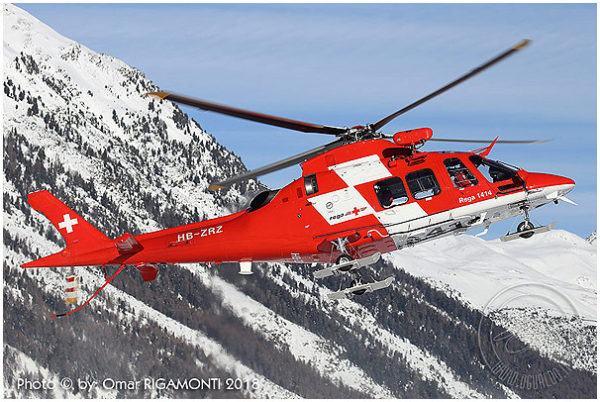 Thanks to Omar RIGAMONTI for this image of the first AgustaWestland AW109SP Da Vinci delivered to Rega as HB-ZRZ in June 2009 … here approaching approaching landing pad in Samedan (GR), January 2018. 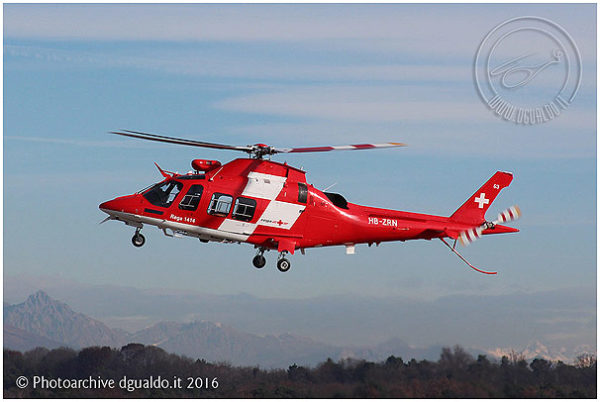 Finmeccanica-AgustaWestland announced today that Swiss Air-Rescue Rega has placed an order for three AW169 light intermediate twin-engine and one GrandNew light twin-engine helicopters which will join the current fleet of a GrandNew and nine single-pilot configured Da Vinci helicopters. The aircraft will perform emergency medical service and search and rescue missions (EMS/SAR) all over Switzerland, from the lowlands to the high mountains of the Alps.

The acquisition of new generation aircraft to meet the future all weather helicopter rescue programme of Rega is valued at CHF 50 million (approximately €46 million). The GrandNew will be delivered to Rega in the autumn of 2016, while the three AW169s are scheduled to be delivered in 2020. These contracts strengthen the long-standing partnership between AgustaWestland and Rega, following decades of successful operations with the A109K2, introduced in 1992, and more recently with the fleet of Da Vinci helicopters which entered service in 2009. As part of the challenging and innovative “Project Icebird”, Rega and AgustaWestland will together set a new benchmark for EMS/SAR operations with the development of the “Helicopter of the Future

Daniele Romiti, AgustaWestland Chief Executive Officer, said “Project Icebird confirms Rega’s strong confidence in our technology, customisation capabilities and the outstanding performance of the AW169. We look forward to working with them to bring their specialised AW169 into service.”

“With the new rescue helicopter, we will be able to extend our scope of operations and in the future come to the aid of more people in distress than ever before,” says Rega CEO, Ernst Kohler. 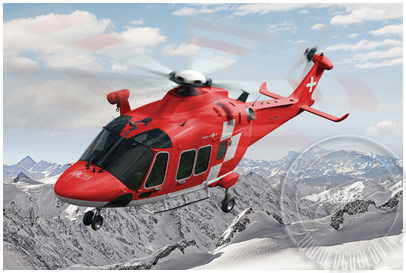 Very sad news was received today from a friend in Slovakia.

One of the ex-REGA Agusta A109K2s, operated now by Air Transport Europe Ltd. Poprad, Slovakia encountered a fatal crash in the mountainous terrain of tourist resort Kláštorisko, about 20 km southeast from Poprad, on late afternoon of 17 JUL 2015.
The A109K2, registration OM-ATB (ex HB-XWI, serial nbr.10009), was on the way to the injured 10-years old boy when hit power lines and felt down about 100 m to the gorge of the river Hornad.
All persons on board, the pilot (44 years old), medicine doctor (45 years old), paramedic/winch operator (34 years old) and mountain rescuer (37 years old), perished in the crash.

Investigation to determine all details of the accident is in progress.

Our deepest condolences to their families and friends. 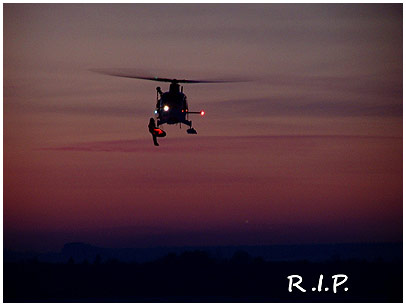